Can My Dog Eat That? Cinnamon 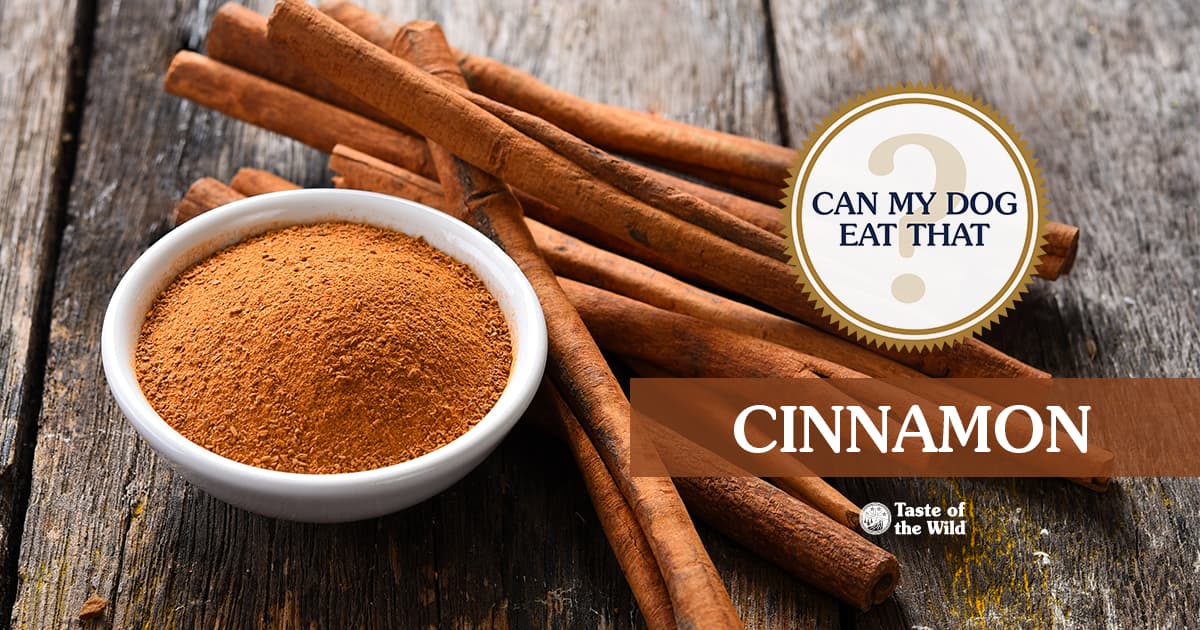 Welcome to “Can My Dog Eat That?,” our series that answers some obvious (and not-so-obvious) questions about what your dog can and can’t safely eat. Read on!

You love a little cinnamon in your eggnog, don’t you? Or a touch of it in your hot cocoa? With so many festive options that are spiced up with a dash of the spice that literally shaped the world once upon a time, it’s no wonder that you might be asking: Can my dog eat cinnamon?

Cinnamon isn’t toxic to dogs, so there’s no reason to panic if they scarf down your breakfast roll when you aren’t looking or swipe a snickerdoodle or two. But (there’s always a but!) cinnamon is a spice, and dogs as a general rule don’t do well with spicy foods. Cinnamon, especially in powder or essential oil form, is an irritant, and it’ll likely cause your dog to cough or sneeze at the very least. An upset stomach is a possibility if too much is ingested.

How Much and How Big?

Of course, it’s all about dosage and dog size. A little cinnamon powder dusted on a cookie might not be an issue at all, but an entire cinnamon stick can make any dog sick, and small breeds really sick. Essential oil is a super concentrated form of cinnamon, so even a little can cause stomach upset. Extended exposure of the essential oil to skin (including lips, mouth and tongue) or eyes can cause burns or rashes. Seems like it’s far from essential!

While the cinnamon in a cinnamon roll might not hurt your dog, the rest of the cinnamon roll certainly isn’t good for them. If cinnamon is involved, the food itself is probably sugary and sweet, and those foods are great big no-nos for your dog. Whatever the other ingredients are in a random gooey, bakery-made cinnamon roll, the vast amounts of fat alone can cause pancreatitis, stomach upset or, long-term, diabetes and obesity. The same goes for cookies, apple pie and pumpkin pancakes. Many foods with cinnamon also contain raisins, which are most certainly something to avoid.

As with any questionable food (or non-food) item your dog might ingest, when in doubt, call your vet. If your dog has ingested an alarming amount of cinnamon powder or essential oils, call the Pet Poison Helpline at (855) 764-7661.

Cinnamon alone isn’t harmful to your dog and is even an approved ingredient in pet food. However, most of the foods that use cinnamon as an ingredient are far from good for them, so it’s best to avoid THOSE.