The One Candidate Everyone Can Agree On: A Dog 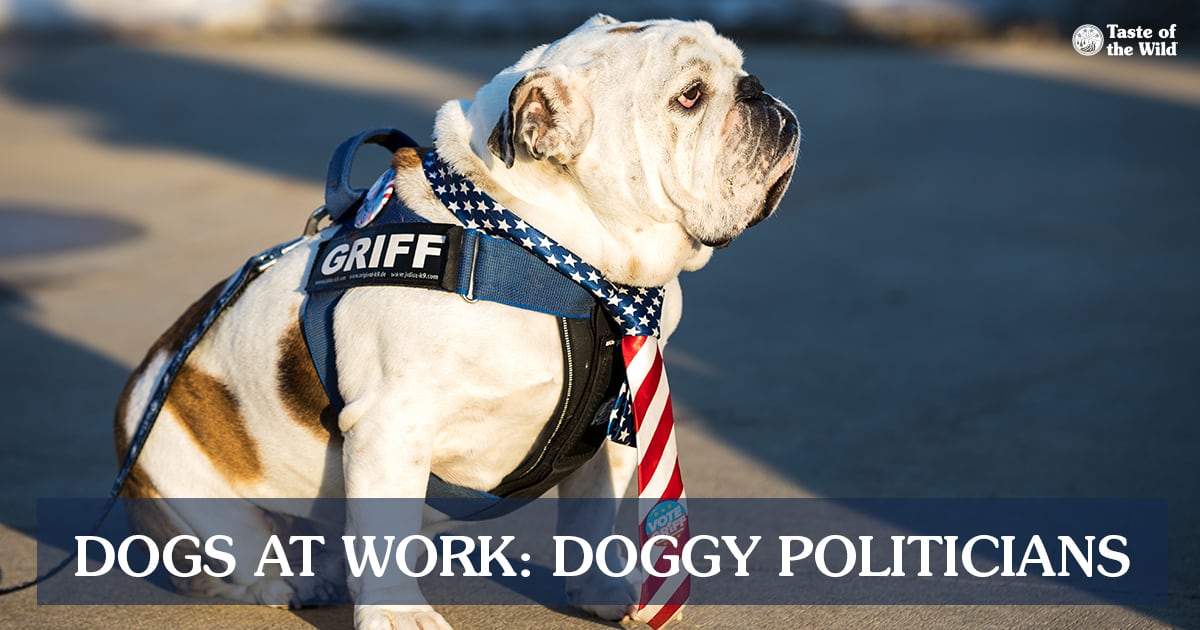 With the presidential race now running full throttle, it’s understandable that you may pine for a kinder, gentler political campaign. One in which there’s no mudslinging, no partisan squabbling and no overblown claims requiring fact-checking. That’s why we’re happy to share this special edition of Dogs at Work featuring pet politicians who have held political offices.

Tai, President of Whangamomona, New Zealand — This standard poodle became the world’s first canine president in 2003, as a way for the residents to thumb their noses at a redistricting effort. Disgruntled by the new boundaries that put their town in a different region, residents renamed it the Republic of Whangamomona, where they could elect their own president each year. Preceded by Billy Gumboot the Goat and Murtle the Turtle, Tai held the office for months but resigned early, after a scandalous tussle with another dog over a bone.

Other animals have mounted unsuccessful campaigns for president in the United States, including a boar hog named “Pigasus the Immortal” in 1968 and a dachshund called Molly in 2008. During the 2016 election, a Kentucky resident by the name of Limberbutt McCubbins, a candidate of the feline persuasion, joined the presidential race as well.

While there’s only been one successful canine president, many cities have elected dog mayors:

Bosco, Mayor of Sunol, California — How can you lose with a campaign slogan like “a bone in every dish, a cat in every tree and a fire hydrant on every corner”? Running on the “Re-pup-lican” ticket, a Rottweiler-Labrador retriever mix beat out two human opponents in 1981 to become honorary mayor of the rural town of under 1,000 constituents. Bosco made international news when a Chinese newspaper denounced the election as an example of the failure of democracy. After a 13-year tenure, Bosco passed away. Today, a bronze statue, complete with a bandana around his neck, commemorates his years of service.

Lucy Lou, the First Female Canine Mayor of Rabbit Hash, Kentucky — Following male canine mayors Junior and Goofy, this border collie bested 15 other candidates including a cat, an opossum and a human to win the seat in 2008. She served until 2016 when she stepped down to make an unsuccessful attempt at the U.S. presidency. She was succeeded by a pit bull named Brynneth Pawltro, who beat a donkey and a cat to win the mayoral seat.

Duke, Mayor of Cormorant, Minnesota — First elected in 2014, the Great Pyrenees has been so popular, he was reelected three times. Citizens pay one dollar to cast a vote, and the proceeds go to various projects around the village. As part of his duties, Duke appears in parades and hangs out at the local pub, for which he receives a year’s worth of dog food from a local pet food store as his salary.

Pa Kettle, Mayor of Divide, Colorado — It was a tight 2014 race, but in the end, the bloodhound triumphed over his opponents: a hedgehog, cat, donkey, wolf and several other dogs. Pa Kettle served until 2016 when a wolf named Shunka took over the post. Today, a Swiss mountain dog named Piper holds the esteemed office.

Stubbs, Mayor of Talkeetna, Alaska — Apparently the citizens of this city didn’t mind a leader who slept on the job because Stubbs the cat held this honorary office for 20 years. Dubbed Stubbs because he was born without a tail, the cat held office hours at Nagley’s General Store, where he was known to lap water infused with catnip from a wine glass.