What Happens to Military Dogs When They Retire? 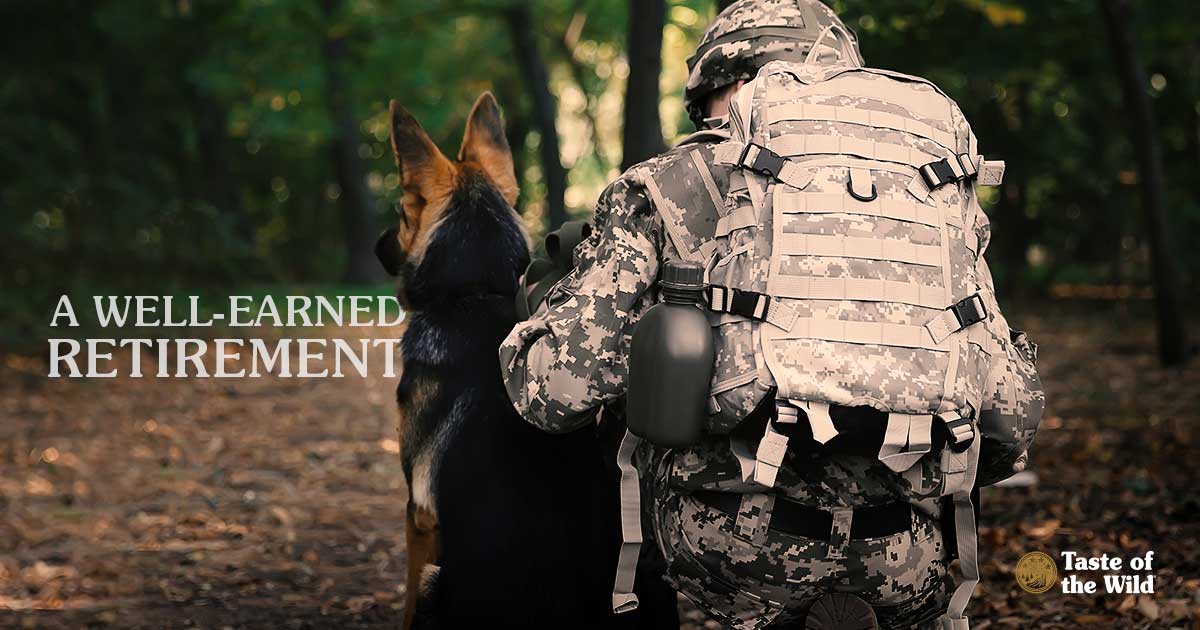 For decades, dogs have served side-by-side in combat with U.S. soldiers. They detect explosives and weapons and even root out enemy forces. In fact, one canine hero even participated in the raid of Osama bin Laden’s home in Pakistan. Military dogs assist on patrols, leap out of helicopters with Navy SEALs and save countless lives.
But what happens when their careers are over?

As recent as the late 1990s, military working dogs (MWD) that were retired from service due to age or medical reasons were considered “surplus equipment,” no longer part of the military and ineligible for transport home at taxpayers’ expense. It was often assumed these expertly trained dogs would never adapt to civilian life. As a result, they were often euthanized or turned over to foreign allies in combat zones.

The public gradually became aware of these tragedies after one military handler rallied to bring his canine partner Robby home, only to meet with defeat and see the dog euthanized. As a result, “Robby’s Law” was enacted in 2000, requiring that MWDs fit for adoption be made available to previous handlers, law enforcement or families that met qualifying criteria.

Even then, discharged handlers in the United States had to come up with thousands of dollars to transport dogs in combat zones back home. Mission K9 Rescue, a nonprofit organization, solicited donations to help rescue and reunite these dogs with their owners. Even private citizens helped out as a way to repay these human and canine heroes for their service.

Finally, the passage of the 2016 National Defense Authorization Act means retired dogs overseas now get a ticket home to the U.S., and their handlers get priority when it comes to adopting them.

Today, Lackland Air Force Base in San Antonio, Texas, serves as both a training facility for military dogs and the U.S. headquarters for dogs returning from service. Three types of dogs are available for adoption here: young dogs that don’t pass the aptitude test for serving in the military (50 percent don’t qualify), older dogs that have finished their military stint, and those who have been retired early due to illness or injury.

Dogs returning from service tend to be large breeds like German shepherds, Belgian Malinois, Labrador retrievers or mixes; breeds that may have conditions such as arthritis or other medical issues. Like their human counterparts, some dogs may also show signs similar to post-traumatic stress disorder, so they’re screened to make sure they have a temperament that can manage family life and don’t have aggressive tendencies.

Dogs not deemed fit for family life are generally channeled into work with law enforcement or the TSA, where they can put their training to good use rather than being euthanized.

Still, more than 90 percent of returning MWDs go home to live with their former handlers. Occasionally, when a handler is lost in battle, the handler’s family may choose to adopt the dog. Others are available for adoption to private citizens, but there’s a long waiting list. Applicants are carefully screened to find the right match for the right dogs. Some MWDs, for example, adjust better in homes without cats, children or other dogs.

Other organizations also bring home stray dogs befriended by service people in war zones. Although these dogs didn’t serve in a military capacity, they did provide emotional support. In either case, reuniting dogs of war with their military companions can help both adjust to life outside the trenches.