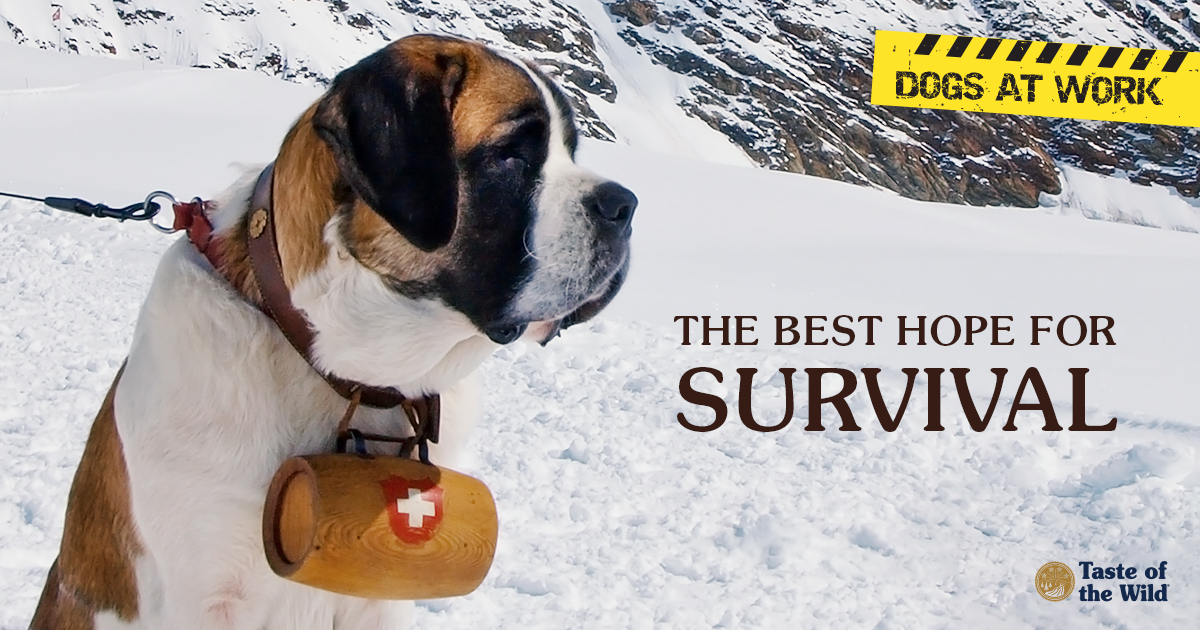 Imagine being swept into a thundering, fast-moving avalanche. You’re catapulted downhill in a rumble of snow, then buried in darkness. The snowpack surrounds you like concrete, so you can’t free your arms to dig out. You’re not even sure which way is up.

Your only choice now is to stay calm and hope someone finds you. If you’re discovered within 18 minutes, there’s a greater than 91 percent chance of survival, according to the Canadian Medical Association Journal. But at 35 minutes, that rate plunges to about 30 percent as the oxygen supply begins to peter out.

When the clock is ticking, an avalanche rescue dog may be your best hope for survival.

An Unmatched Sense of Smell

These highly trained canines can cover more ground much faster than their human counterparts. For instance, an avalanche dog can typically search 2.5 acres — roughly the area of two football fields — in about 30 minutes. To search the same area, it would take 20 people about eight times longer.

While people rely on long probe poles or beacons that can pick up radio frequencies from the victims’ transponders, an avalanche dog locates buried humans using just his or her keen sense of smell. These dogs have proved so successful that many ski resorts now station avalanche rescue dogs on the mountainside with their ski patrol teams. The dogs ride the lifts with their handlers and are prepared to climb onto snowmobiles or jump into helicopters to reach an avalanche site in minutes.

Not All Saint Bernards

The concept of avalanche dogs may bring to mind the classic image of a Saint Bernard parting the snowdrifts, brandy cask secured under his or her chin. But in fact, other dog breeds are more commonly used today.

Trainers generally look for agile dogs with a strong hunting drive, such as Labrador retrievers, German shepherds and golden retrievers or crosses of those breeds. Herding breeds, such as border collies and Australian shepherds, may also excel at this work. The dogs have to be non-aggressive towards people and get along well with other dogs.

The dog must know basic obedience commands, be able to follow hand signals and work under cold and often stressful conditions. For example, when there’s no place for a helicopter to land, avalanche dogs and their trainers may be lowered to the mountainside from a long rope dangling from the helicopter. (This practice, called “long lining,” is allowed in Canada but not in the U.S.)

If they start as puppies, it may take two to three years for an avalanche dog to become fully trained. Even then, handlers must keep up the training on a regular basis.

Handlers, who are typically part of a search and rescue team and certified in first aid and avalanche rescues, train dogs to use their hunting drive to search out human scents under the snow. For dogs, it’s almost a game of hide and seek. Dogs receive a positive reward, such as a game of tug-of-war, for locating people hidden in “snow caves” or people-scented clothing buried up to 30 inches under the snow.

Dogs are taught to dig and bark to indicate their finding. Once the dogs successfully locate their handlers under the snow, the search is made more difficult by substituting strangers. Because multiple people may be caught in an avalanche, dogs are even trained to find several people in different snow caves.

Dogs may also learn additional skills, such as running between their handler’s skis to help protect their paws from the sharp edges of other skiers. They may even learn to ride on the handler’s shoulders to conserve energy when covering a lot of ground.

Avalanche dogs generally have careers that span 8 to 10 years. Their handlers have to keep a close eye on them and watch for signs of aging, pain or lameness. Then the dogs can retire into the warmth of home, content that they’ve done their job saving human lives.