A Man and His Dog, Protecting the Great Outdoors 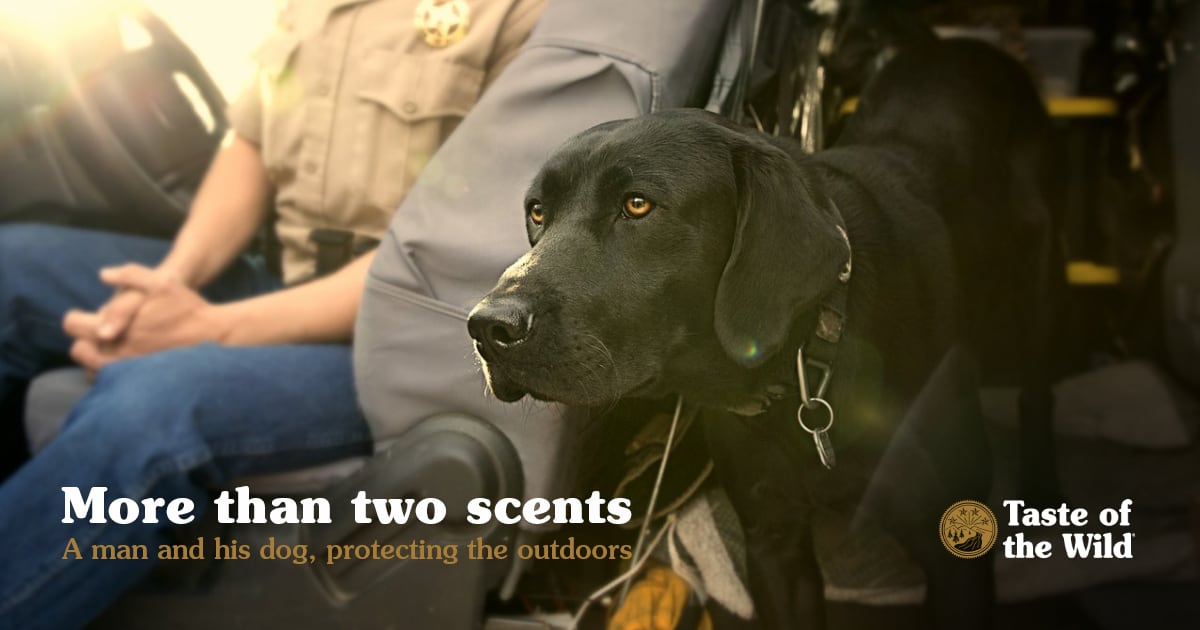 Brock McArdle is almost breathless as he tells the story of the case. A wounded victim, lost on a mountainside. A one-in-a-million shot at finding the subject. But thanks to the literal doggedness of Brock’s partner, Cash, the duo found who they were looking for. Case closed.

“It was a needle in a haystack,” the Colorado Parks and Wildlife district wildlife manager remembers. “It wasn’t clear terrain, and the turkey could have run anywhere. But Cash did what he does, and he found it hidden in a spot that the hunter had walked by numerous times. Pretty cool that we found it!”

It might not have been a typical day in the life of Brock and his K9 partner, but it is a part of the job. The turkey was dead when Cash sniffed it out, a few hundred yards away from where a hunter winged it. But it was found, and it wasn’t suffering. A successful mission for Cash and Brock. 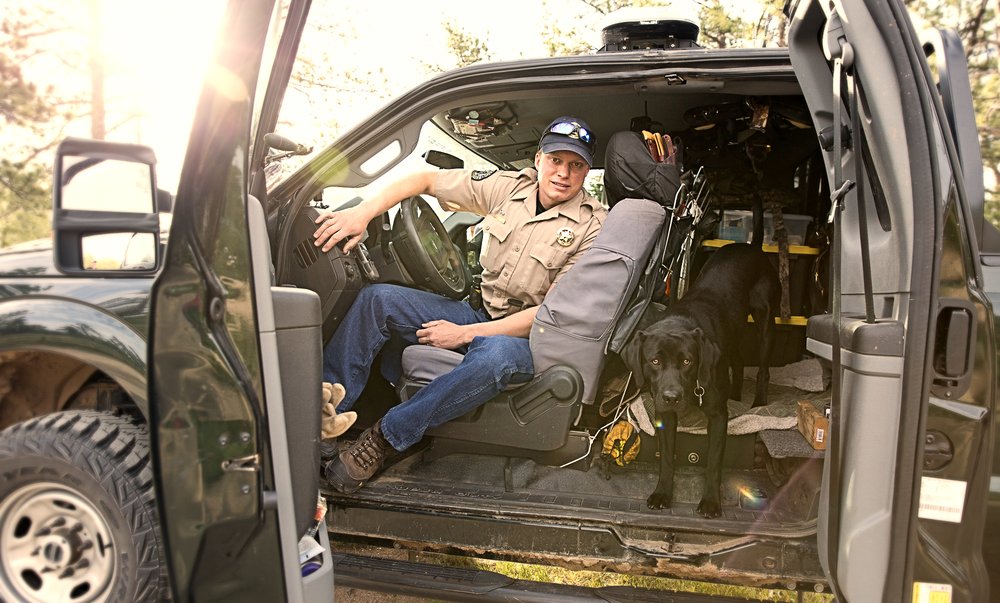 Cash & Brock. It sounds like the title of a cop movie starring a mismatched but heroic duo. And in many senses, that title is perfect. In real life, Cash and Brock are a heroic duo. But instead of chasing bad guys through the mean streets of LA or NYC, they work to protect the wilds of northern Colorado, sniffing out sneaky poachers, searching for endangered ferrets, and tracking down, yes, wounded turkeys.

Brock is a wildlife management officer with Colorado Parks and Wildlife, the department that manages 41 state parks and 307 wildlife areas in the state. Cash, a two-year-old black Labrador retriever, is his partner. Together, the pair patrols half a million acres of pristine natural territory in northern Colorado, protecting the environment, the animals who live in it and the people who use it.

Cash’s main weapon is his highly trained nose. He’s certified by the National Police Canine Association to work in law enforcement as a wildlife detection officer anywhere in the country. He specializes in detecting 11 animal odors, nine of which are directly related to enforcing the law in the great wide open. Cash’s sensitive snoot can detect, with pinpoint accuracy, the scents of moose, bear, mountain lion, elk, deer, antelope, upland birds (turkey, dove, pheasants), water fowl and fish, even if just a trace of the animal was in the area. 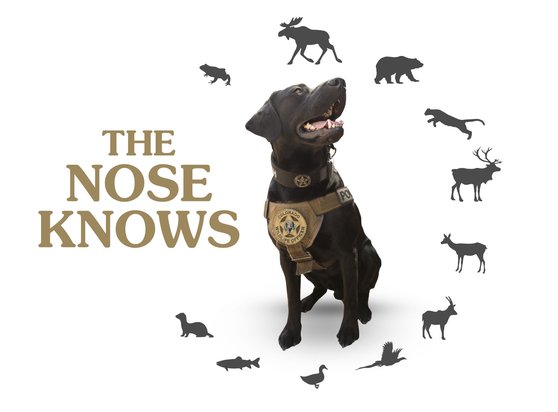 The duties of Brock and Cash fall into three areas: law enforcement, wildlife management, and education. If Cash is sniffing out any of the aforementioned nine scents, it’s usually in the service of catching poachers. He can detect animal parts hidden in trunks, secret compartments, or different rooms of an RV. He can also detect where those animals used to be. And by doing so, he’s also helping those hunters and fishermen who do obey the law.

“He’s just efficient,” Brock says. “If we’re at a checkpoint and we suspect that a vehicle has or had illegal animal parts in it, Cash will alert to the scent. It prevents us from having to ask someone to empty their trunk or take everything out of the vehicle. If it’s not there, he won’t alert. It saves us a lot of trouble and keeps law-abiding hunters moving.”

A champion of the little guy

When Cash isn’t protecting game animals from poachers, he’s doing his part to protect other animals from extinction. Cash is trained to detect black-footed ferrets and boreal toads, two endangered species. The ferrets are on the federal endangered list, while the toads at this time are endangered in Colorado and New Mexico.

Once thought extinct due to plague, poison and destruction of habitat, the black-footed ferret is the only ferret that is native to the United States. Those ferrets you see in the pet stores? They’re actually domesticated versions of the European polecat and don’t live in the wild in the U.S. The wild black-footed ferrets were thought to be gone for good until they were discovered living in Wyoming woods in the late 1970s. In the ensuing years, an effort by conservationists to foster the species resulted in 18 black-footed ferrets living in captivity in 1986, but they were still extinct in the wild for decades. Today, due to translocation efforts by conservationists, there are colonies spread throughout their former territory that stretches from Canada to Mexico. But it’s a tenuous success, and the ferrets remain on the federal endangered list.

That success is what makes Cash’s job so important. A healthy ferret population in Colorado is a sign of a healthy ecosystem. If they start disappearing, it can be a sign of bigger problems. Brock and Cash seek them out so that researchers can monitor population numbers, check for signs of plague and determine whether measures need to be taken to help a colony thrive. But finding them isn’t easy. The long critters live underground, in prairie dog habitats. If Cash detects ferret scent outside of a prairie dog hole, researchers can set live traps with a much higher degree of success than observation or guesswork.

Since black-footed ferrets are reliant on prairie dogs, their primary food source, a dip in ferret numbers can be a sign of an issue with prairie dogs. If there’s another reason that ferrets are struggling, the prairie dog population can get out of control since the black-foots are vital in managing those numbers.

While the Colorado boreal toad population situation isn’t as dire as its weaselly neighbors, Colorado’s only high-elevation toad is in danger of being formerly Colorado’s only high-elevation toad. The population is less than half of what it once was due to chytrid fungus, a skin disease that has hurt populations of more than 200 amphibian species around the world. As with the black-footed ferrets, boreal toads are difficult for researchers to find, because they’re almost perfectly camouflaged to blend in with their surroundings, and those surroundings — streams, ponds and marshes — inherently are difficult to search. The toads only move around at night and they’re largely silent.

Which is why Cash’s sniffer helps manage the local toad population. Cash is simply a more efficient hunter than a team of researchers who rely on nothing but visual cues. “He just covers a lot more ground with a lot less manpower,” Brock says. “With Cash, more effort can be spent on collecting, counting, and checking for the fungus instead of the search.”

Colorado’s boreal toads eat tons of beetles, flies and mosquitos, making the environment just a little more comfortable for others who share the great outdoors. But even more importantly, a healthy native population means that good things are happening. Everything in nature is connected. A threatened species signifies an imbalance somewhere. Cash and Brock’s part in ensuring that these struggling species begin to thrive is part of what will keep the great outdoors…great.

Education with a kiss

Advocacy and education play a huge role in the life of a wildlife manager. Brock visits schools, churches and community events to stress the importance of conservation, the preservation of our wide-open spaces and the protection of the animals who live in them. “Cash is great at these events,” Brock says. “I talk about what I do, but it’s when I talk about how Cash helps me do my job that people really take an interest. He loves kids and people, and they love him. He’s technically on the job, but I don’t mind if people pet him. As long as they don’t mind if he jumps on them or tries to lick their faces. He is still a Lab!”

When he’s not sniffing out poachers, running nose-to-ground in search of ferrets or helping Brock spread the word about Colorado Parks and Wildlife, Cash lives the good life. He’s a working dog, but he’s also a pet for Brock, his wife and their two young children.

“Cash is certainly spoiled,” Brock says. “He has his own couch because he won’t lay on a hard surface.” Cash watches TV with Brock’s 4-year-old daughter and 6-month-old son. “He seems to enjoy Sesame Street, because of all the puppet animals.” Cash goes camping with the family, and if you go toward the outside door, he follows without hesitation. Like most Labs, he loves being social. “He loves other dogs, and he thinks everyone should love him back,” Brock says. “Which has led to issues at the dog park!”

Cash gets spoiled a little in the kitchen, too. As a high-energy, active dog who is exposed to a number of different environments and external elements every day, he needs the right kind of nutrition. Recently, Cash was diagnosed with a skin allergy that caused the fur on his stomach and chest to fall out and his skin to get dry and flaky. Brock tried a number of options before settling on Taste of the Wild PREY’s trout formula. The limited-ingredient diet was just the thing he needed to keep up with his active lifestyle in the field while looking presentable at events.

“Y’know, his fur was falling out, and then we switched to PREY and it stopped,” Brock says. “He’s a black Lab, but his fur shines in the light. Everyone comments on how shiny he is, and he’s really soft for a Lab.”

The simple life, with dog

As a conservation officer, Brock believes in the environment, and that means keeping things untainted and simple. He tries to live his life by that philosophy, and he extends that philosophy to his family. And that family includes his partner, Cash.

“Being out there with wildlife and enjoying the great outdoors and nature, you want everyone to enjoy it like you do, and that includes your pets,” Brock says. “We live in town but spend a lot of time on the mountainside. You’re out there on that mountain; you know what you’re getting. There’s no pollution; it’s just natural.”

“It’s why I eat wild game,” he concludes. “You know it doesn’t have additives or anything weird. Cash is family, and I want him to eat and live as well as I do.”

And by working every day to preserve the 500,000 acres they patrol, Brock and Cash help others enjoy the lives they lead.