Left-Handed Pets: Can That Be Right? 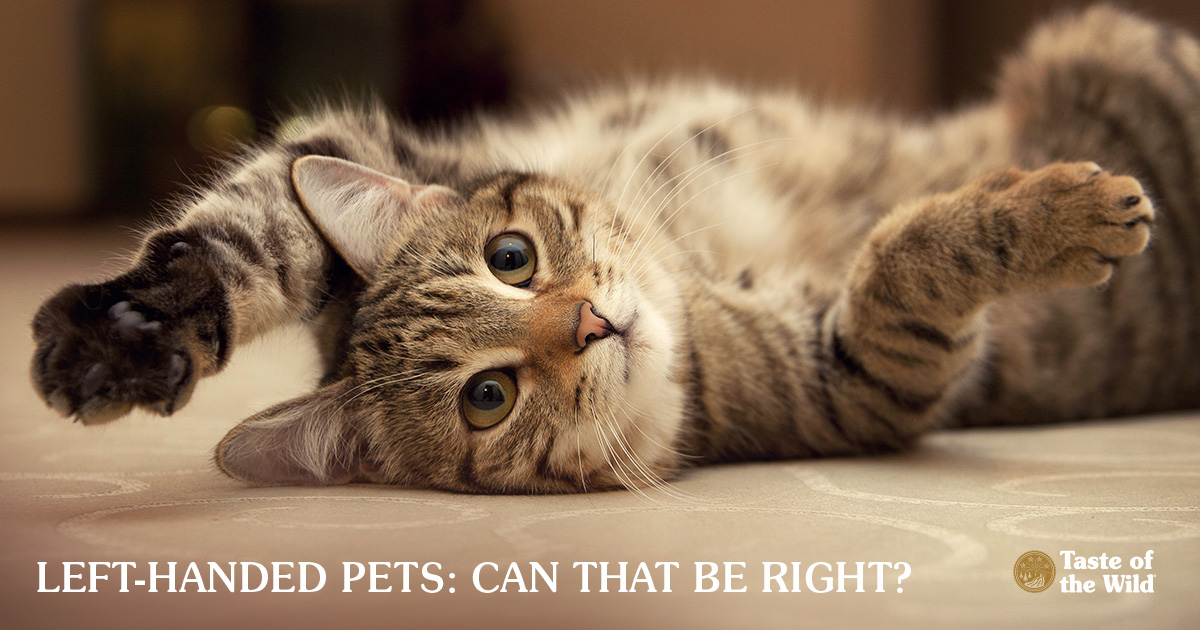 Oh, the plight of left-handed people. It’s hard enough that they have to deal with right-handed scissors and can openers. Then there are cup holders in cars, situated inconveniently on the right side of the driver’s seat. Even writing in a 3-ring binder or spiral-bound notebook requires a certain amount of contortionism.

Maybe that’s why they’re honored with International Left-Handers’ Day on August 13th.  Of course, this begs the question: Can our four-legged friends be southpaws, too?

As it turns out, the answer is yes.

While only 10% of people are left-handed, it’s not as easy to pin down an overall number for cats and dogs. But research shows individual pets may have general paw preferences or may favor a dominant paw for different uses.

In a study of spontaneous paw use in cats, for example, researchers found that 73% of cats relied on a preferred paw when reaching for food, 70% led with the same paw when descending the stairs and 66% had a paw preference when stepping into the litter box.

There are more left-handed men than women, and that hold true in the feline world: male cats were found to prefer using the left front paw, while females preferred the right. Studies of neutered pets found no paw preference, indicating that sex hormones may play a role in paw dominance.

Pets and people aren’t the only ones with a left or right preference. Kangaroos and parrots tend to favor their left sides, while hump-backed whales (who don’t really have paws) tend to dive to the right.

Is Brain Wiring a Factor?

Scientists aren’t sure what makes people or animals favor one hand — or paw — over another, but they assume that it’s probably a combination of genetics and other factors, both learned and environmental. Side preferences are associated with brain function because the right hemisphere of the brain controls the left side of the body, while the opposite is true for the other side: the left brain controls the right half of the body.

In humans, the left side of the brain is linked with scientific, mathematical and logical functions, while the right is associated with dreams, music and art. In animals, however, some scientists conjecture that the left side is often favored when fleeing predators, assigning “fight or flight” functions, including stress and anxiety, to the right side of the brain. In fact, tree frogs tended to jump to the left to escape predators, according to one study.

In a dog study, those who were “lefties” or ambidextrous (used both front paws equally) tended to be more stressed than their righty counterparts. This could explain why puppies who favored their right paws were more likely to pass the rigors of service dog training than lefties.

Is Your Dog a Righty or a Lefty?

Put your pet to the test:

• Place a toy or treat on the floor within your pet’s reach and see which paw they use to fetch it.

• For cats, dangle a feather toy or race a laser pointer across the floor and see if they swat at it with a predominant paw.

Repeat this exercise with your pet about 50 times. If your pet uses one paw more than the other about 65% of the time, it could be demonstrating a paw preference. Who knew?