Don’t Get Caught in the Claws of Cat Scratch Fever 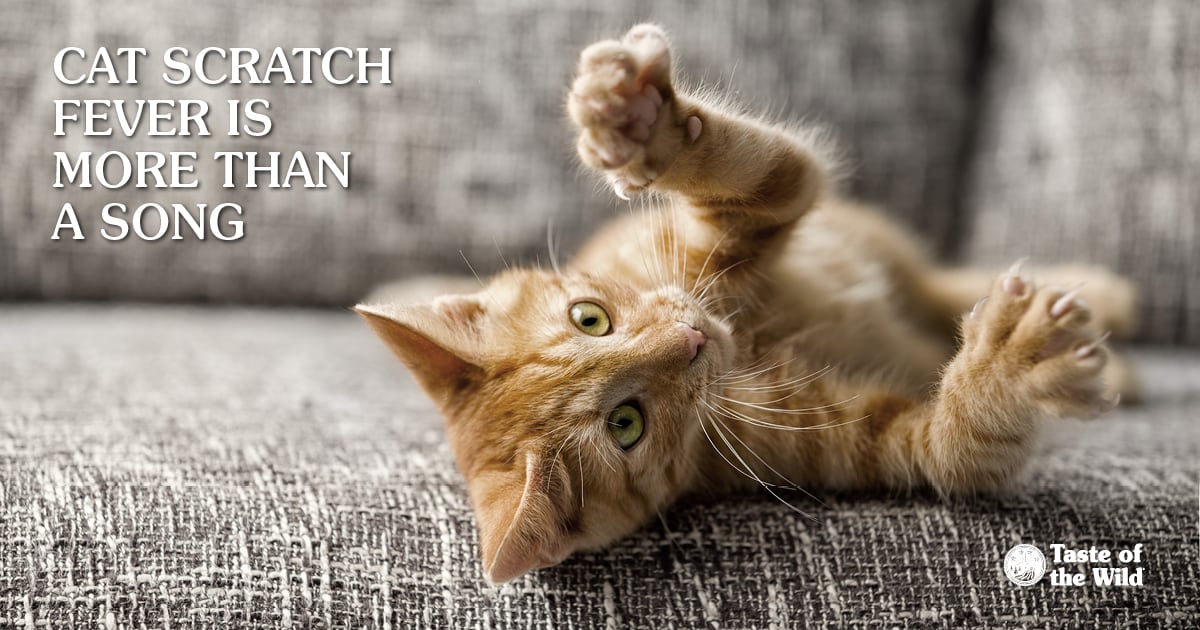 Let’s say your kitty swats at you while playing and inadvertently scratches your skin. Innocent enough, right? Most of the time, it is. But in some cases, it can lead to cat scratch disease (CSD), also known as cat scratch fever.

A BACTERIAL INFECTION FROM CATS

About 40 percent of cats are infected with Bartonella henselae, the bacteria that causes CSD, at some point during their lifetimes. Most often, cats become infected from a flea bite and, less commonly, from biting flies or ticks. Fleas also leave behind flea dirt, or droppings, which can contain the bacteria. If the flea dirt spreads into an open wound, cats can become infected that way, too.

A cat with fleas is usually itchy, and when they scratch themselves, infected flea dirt can lodge around their nails. If that cat scratches a person and breaks the skin, the bacteria can infiltrate the person’s body. People can also become infected from a cat bite or by allowing a cat to lick an open wound on their skin.

Most cases of CSD in people aren’t serious. Those who are infected may experience headaches, fever and swollen lymph nodes near the bite or scratch. However, people with weakened immune systems may experience more serious complications affecting the heart, brain, eyes or other organs.

CSD can be difficult to diagnose and may require a physical exam, blood tests and possibly a lymph node biopsy. In mild cases, most people recover without treatment, but more serious infections usually require antibiotics.

MOST CATS SHOW NO SIGNS OF ILLNESS

It’s hard to know if your family is at risk, because most cats infected with the bacteria show no signs at all. Others may show signs such as lethargy, loss of appetite, fever, vomiting, swollen lymph nodes or red eyes.

DOGS CAN BE INFECTED, TOO

Dogs can become infected with various types of the Bartonella bacteria through the bites of ticks, fleas or infected cats. They are more likely to show signs than cats, including fever, swollen lymph nodes, jaundice, lameness, weight loss and a bloody nose. It’s not known if dogs can transmit the bacteria to people.

Infected dogs and cats are typically treated with a long course of antibiotics.

Fleas can harbor other disease-causing agents, and once they’re in your house, it can be tough to get rid of them. So why not help prevent your pet from getting them in the first place? To help protect your pets — and your family — from Bartonella, ask your veterinarian to recommend an effective flea and tick preventive that’s right for your dog or cat.

When playing with kittens and cats, focus their attention on a toy, rather than your hands, to help avoid accidental scratches or bites. If you are bit or scratched, wash the area with soap and warm water. And although it can be hard to turn down affection from your cat, don’t let your cat lick any open breaks in your skin.

RELATED POST: Everything You Need to Know About Flea Protection