Dogs at Work: Standard Poodles Were Born to Be Bird Dogs 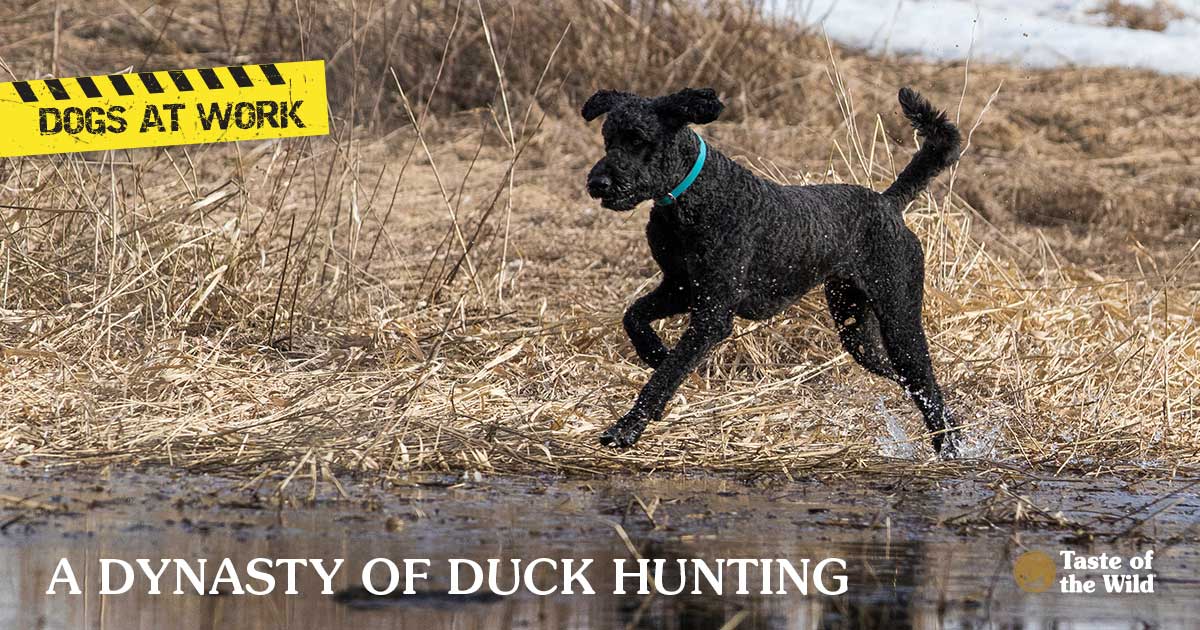 Not all standard poodles are froufrou, overly coiffed dogs adorned with diamond-studded collars and red-painted toenails. Some of them actually like to get dirty.

Surprised? You shouldn’t be. Standard poodles were originally bred as bird dogs and can now be found leaping from duck blinds, flushing waterfowl and retrieving the birds with a soft mouth.

A History of hunting

The standard poodle’s hunting roots can be traced to Germany, where they were used as duck hunting dogs at least 400 years ago. In fact, a hint to the breed’s hunting history is hidden in its name: The English term “poodle” is actually shortened from the German name Pudelhund, which combined hund (dog) and pudel (puddle) from the term pudeln, meaning “to splash about.”

The breed’s popularity spread across Europe, becoming known as the chien canard and caniche, or “duck dog,” in France. Although the poodle is the national dog of France and is often thought of as a “French poodle,” the country is not part of the breed’s official name.

When the American Kennel Club (AKC) was established in the late 1800s, it classified standard poodles in the non-sporting group, but other dog clubs had a different opinion. To the Canadian Kennel Club (CKC) and the North American Hunting Retriever Association (NAHRA), the breed is a retriever, and the United Kennel Club (UKC) considers it a sporting breed.

Now, the standard poodle is the only “non-hunting” breed that is eligible for AKC Retriever Hunting Tests, which measure a dog’s ability to perform against a standard (rather than competing against other dogs) in actual hunting scenarios when the dogs must track down felled birds.

Why do poodles excel in the field?

To clarify, we’re referring only to standard poodles, the oldest and tallest of the poodle line, not the smaller miniature or “toy” poodles (although they have been known to hunt truffles and small prey closer to the ground).

A standard poodle is defined as being at least 15 inches in height at the shoulders, but most dogs used for hunting average about 24 inches in height. Generally lean and full of energy, standard poodles have a reputation for being one of the most intelligent breeds and tend to be easy to train. And in hunting, training can be important — some poodles may have lost the hunting instinct through breeding over the years.

They have a moisture-repellent coat — perfect for diving into the pond after ducks — and they don’t shed. That said, the fine, curly coat keeps growing, so if it isn’t trimmed regularly, it will wind into cords that reach the floor. And that puffball trim standard poodles are so known for? It actually started as a way to make it easier for the dogs to hunt. Hunters shaved the dog’s neck, legs and tail to help provide mobility in the water, but left the chest, hips and leg joints covered to provide insulation in cold temperatures.

These days, hunters typically keep the dogs’ coats trimmed to about an inch in length. At that length, the coat curls tightly next to the skin to provide warmth and protect the canines from being scratched by brush.

Finally, standard poodles are typically happiest with their people. So, spending time in nature with “the guys” can be one of their favorite activities.