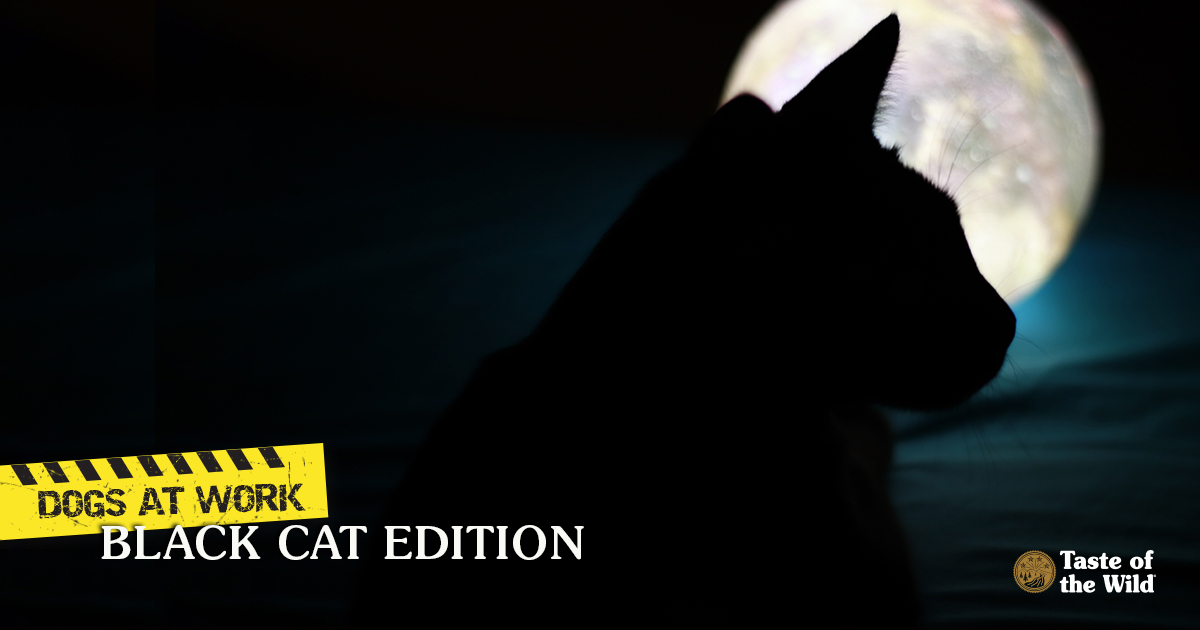 This Halloween promises to be more auspicious than most. Not only will a full moon fall on this date, an event that typically only occurs every 19 years, but it will be a blue moon, or the second full moon of the month. This ghostly glow is the perfect backdrop to discuss the ultimate symbol of Halloween, the black cat.

Rightly or wrongly, black cats are plagued with superstitions.

In the Middle Ages, the Roman Catholic Church declared that cats were friends of the devil. As such, many believed a black cat could be a witch in disguise, a witch’s pet sent to keep tabs on humans, or a witch’s “familiar,” a channel enabling witches to speak to the spiritual world. Black cats became forever entwined with witchcraft and were even killed with perceived witches during the Salem witch trials in Massachusetts.

Cats were also associated with death. Italians used to believe that if a black cat sat on your sickbed, it was a sign of imminent death. In North America, if a black cat crosses your path, it’s believed you’re in for bad luck (although the opposite is true in England, Ireland and Asia).

Ancient Egyptians worshipped all cats, but perhaps black cats most of all because they resembled the deity Bastet, the goddess of the home, fertility and childbirth who often protected the home from disease and evil spirits.

Years later, British sailors believed having a black cat on board a ship would bring good luck and ensure safe passage (not to mention keeping the mice population to a minimum). Blackie, a mostly black cat aboard the HMS Prince of Wales, a Royal Navy battleship during World War II, gained notoriety when Prime Minister Winston Churchill leaned down to give the cat a rub. The cat was later renamed Churchill.

In some cultures, owning a black cat can bring you luck or love. Good luck is thought to come your way if you dream about a black cat, if you see one walking toward you, or if you find a white hair on its black coat. A black cat who curls on your porch is thought to bring you prosperity.

Many Asian countries, such as China and Japan, post maneki nekos — cat figurines with waving paws — outside restaurants and shops to bring good fortune. If the left paw is raised, the cat beckons people to enter. A raised right paw invites money, and both paws raised attracts customers and good fortune. If the mankei neko is black, even better — it’s thought to ward away evil, as well.

Although some people think black cats might have trouble being adopted because people cling to superstitions, it’s just not so, according to a study by the American Society for the Prevention of Cruelty to Animals (ASPCA). After reviewing 14 regions of the U.S, with about 300,000 adoptable dogs and cats, black cats had the highest adoption numbers, coming in at 31 percent of all feline adoptions, compared with 20 percent for gray cats and 18 percent for brown cats.

As it turns out, black cats may have another thing going for them. It’s possible that the mutation that causes black coat coloring may be associated with the gene that gives humans resistance to viral infections like HIV. While it’s yet to be proven, that may mean black cats may be more resistant to certain diseases. What could be luckier than that?