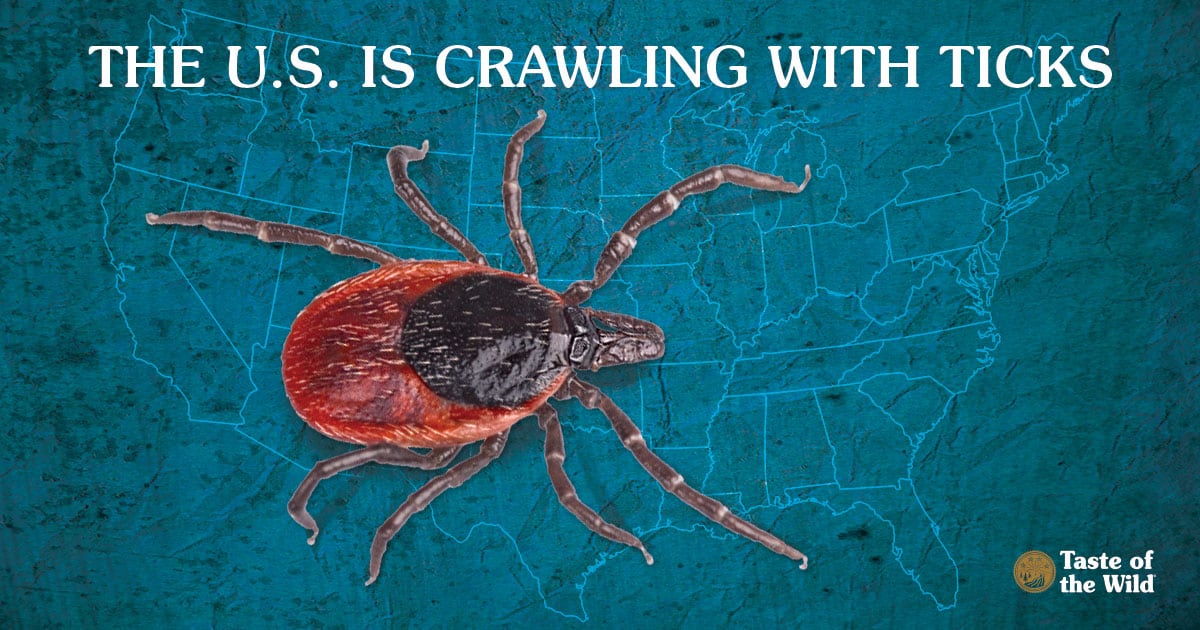 The reports are in: the United States is crawling with ticks. Thanks to warmer climate trends, these blood-sucking creatures now thrive in more regions of the country. Additionally, the expansion of housing into rural areas has forced wildlife such as raccoons, opossum and birds into the city, carrying ticks with them.  And white-tailed deer, the favorite hosts for the tick species most notoriously associated with Lyme disease, are bringing more ticks into a neighborhood near you.

The result? There are now more ticks in more places than ever before.

The problem is, many of these ticks carry viruses and bacteria that can cause serious disease in pets and people. Lyme disease, for example, is currently the most common vector-borne disease in the United States. And these tiny parasites can crawl onto the skin, take a blood meal and drop off before you even know what bit you.

For dogs, one bite from an infected deer tick, also known as black-legged ticks (Ixodes scapularis in the Northeast, Midwest and Southeast and Ixodes pacificus in the West) can lead to the potentially debilitating and sometimes fatal Lyme disease. It’s actually caused by Borrelia burgdorferi, corkscrew-shaped bacteria that are estimated to infect about 50 percent of deer ticks. Although it’s possible for cats to become infected, they generally don’t show signs of disease.

Typically, an adult female deer tick will latch onto the dog’s skin and suck blood. It generally takes 24 or 48 hours for the tick to transmit the bacteria to the dog.

About two to five months after dogs become infected with the bacteria, they may experience fever, a lameness that shifts from one leg to another and/or swollen lymph nodes. In severe cases, some dogs may look like they’re walking on eggshells. However, approximately 90 to 95 percent of infected dogs won’t show signs of illness at all. The bullseye skin lesion often seen in people usually doesn’t occur in dogs.

To complicate matters, ticks can be infected with multiple disease-causing agents, so dogs may develop multiple tick-borne diseases with different signs.

Undiagnosed, Lyme disease can progress to kidney disease, with signs such as loss of appetite, lethargy, vomiting and weight loss. For dogs with kidney infection, the prognosis is often poor.

Lyme disease is diagnosed with a blood test. Dogs living in or traveling to high-risk areas for Lyme disease should be screened for the infection. If your dog tests positive, your veterinarian will likely recommend a urine test to see if the infection has progressed to the kidneys.

Treatment usually involves antibiotics, but treatment itself is controversial. It’s generally not recommended to treat dogs testing positive for the infection unless they show signs or have evidence of kidney involvement. With treatment, dogs usually show signs of improvement within 24 to 48 hours. Although treatment is usually successful, it is possible for organisms to remain in some tissues.

Cases of Lyme disease in dogs appear to be increasing in the Northeast, an epicenter for the disease, and spreading into other areas that were previously not at risk, according to a recent study by the Companion Animal Parasite Counsel (CAPC). New cases in Illinois, Iowa, Michigan, North Dakota, Ohio and Tennessee suggest that the people in those areas may be at risk, too.

You can’t catch Lyme disease from your dog, but the same ticks that infect your dog can infect you, too. Check out the CAPC 30-day forecast maps for the Lyme disease risk status in your area.

Many people think that ticks are only a problem during the spring and summer months. But in some parts of the country, especially areas that remain above freezing, deer ticks can be active all year round. And while it may be more likely to encounter ticks when hiking through the woods, that doesn’t mean city dogs aren’t at risk. Wildlife can carry ticks into the city where these parasites can thrive in leaf litter in parks and yards.

That’s why CAPC recommends year-round tick prevention for dogs. Lyme disease and other tick-borne diseases can be difficult to diagnose and treat — so prevention is the best option. Other preventive steps include:

As always, your veterinarian is your best resource for advice on how to protect your dog from Lyme disease.