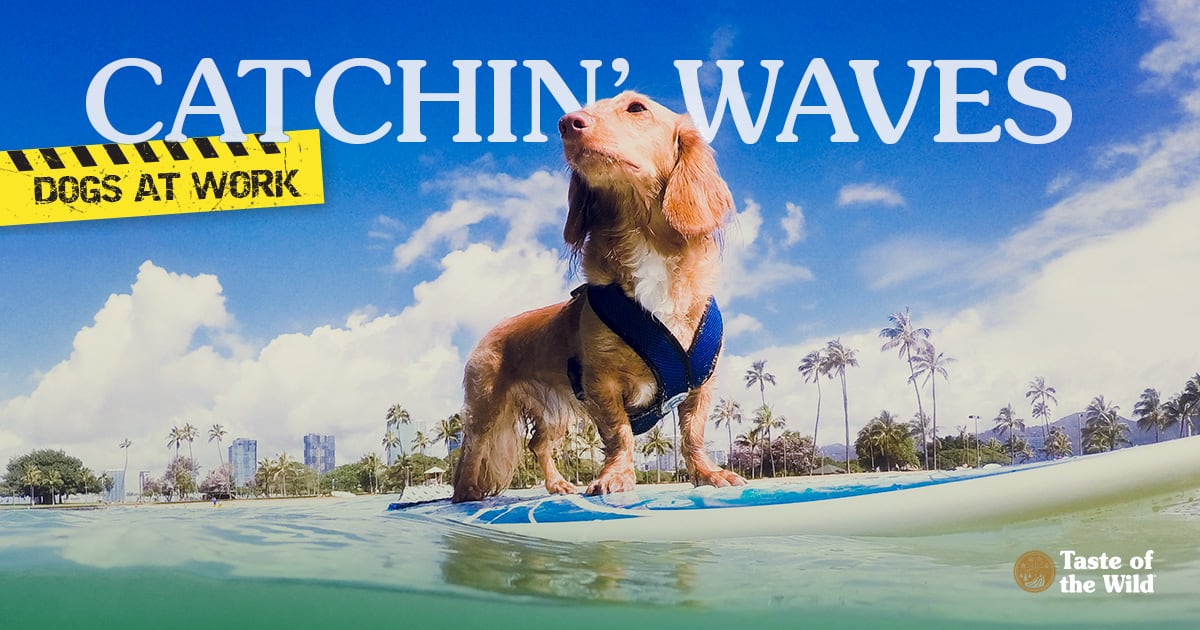 You’ve witnessed dogs on skateboards. Dogs diving off docks. And dogs racing through obstacle courses. But dogs on surfboards?

It’s true. In states like California and Hawaii, dogs have been cresting the waves on surfboards, either alone or with a human, for almost a century. But the first official dog surfing competition didn’t happen until 2006 in San Diego, California. Since that time, similar contests have spread across the world.

Although the rules vary from one competition to the next, dogs are generally divided into weight categories and judged on height of the wave, length of the ride, confidence while riding and any tricks performed.

Most dog surfing competitions are held to fundraise for causes. But sometimes, dogs earn recognition, too: Abbie Girl, an Australian kelpie, rode a 351-foot wave in San Diego, right into the Guinness World Records for the longest wave (open water) surfed by a dog.

But surfing can’t be a canine instinct — so how did dogs learn to surf? Let’s look at the story of one of California’s early competitive surfing dogs.

As a puppy, a female golden retriever named Ricochet was enrolled in service dog training. To help her learn balance and coordination, trainers placed her on a boogie board in a pool. She instantly gained her “surf legs,” showing a natural gift for staying afloat on water.

For other aspects of service dog training, however, Ricochet was a little too fun-loving, preferring to chase after birds than focus on the task at hand. Eventually, it was decided that being a traditional service dog was not in her future.

Ricochet’s owner, however, remembered her natural affinity to buoy herself on the water, and gradually introduced her to the surfboard and eventually, the ocean.

When Ricochet was asked to participate in a surfing dog competition at 15 months of age, she earned her first medal. Since that time, she’s raised more than $500,000 for more than 250 animal and human causes. Not bad for a service-dog dropout.

Ricochet began to surf in other competitions and events. In one instance, she rode the same wave, but on a separate board, next to 14-year-old Patrick Ivison, a quadriplegic adaptive surfer. After a few runs, Ricochet leaped off her board and onto Patrick’s surfboard. Thus began her career as the ambassador for Surfers with Disabilities.

Since then, Ricochet has become a certified therapy dog, providing canine-assisted surfing to help people with physical, emotional or cognitive challenges.  She has surfed with kids with special needs, wounded warriors, disabled people and those with PTSD.

Some adaptive surfers use her body to help them stand up, then hold onto her back while she balances the board. When riders start tilting in one direction, Ricochet can counterbalance the board to prevent wipeouts. In this way, Ricochet has made a career out of helping people with disabilities gain confidence and get out there and have fun.

Of course, if you’re thinking of getting your dog on the surfing circuit, consider that the ocean can turn dangerous fast, developing riptides when you least expect it. And even if your dog is already a champion swimmer, a life vest is a must. Start by visiting dog surfing websites for tips on how to help your dog stay safe while riding the waves.