Conservation Dogs Work Where the Wild Things Are 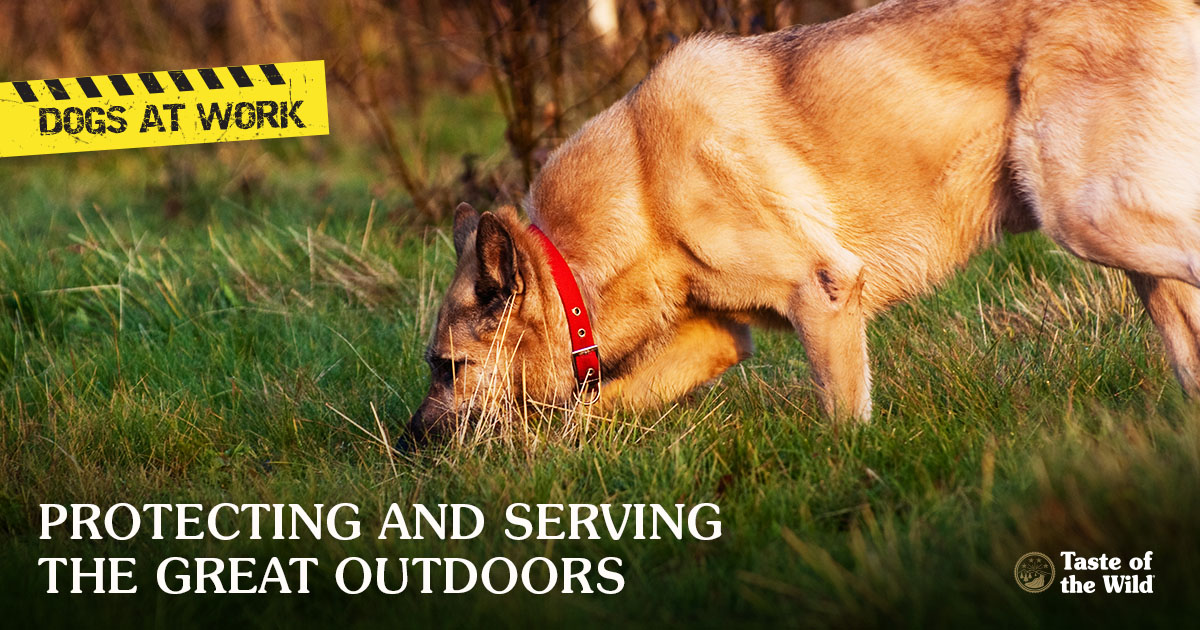 Ruger, a Labrador retriever mix, was the sole member of his litter to escape being shot by his owner.

Although he was already going blind when he was discovered at a local animal shelter, the folks at Working Dogs for Conservation, an organization that trains detection dogs for national and international conservation work, recognized Ruger’s potential and welcomed him to their pack.

High-energy dogs like Ruger, who tend to ricochet off the walls, are often shelter “failures,” meaning they may not make good pets for quiet, sedentary households. But those same qualities often make them ideal for conservation work.

Putting Canine Noses to the Test

A dog’s nose contains up to 300 million olfactory receptors, making the 6 million in a human’s nose seem measly by comparison. This amazing sense of smell is channeled into conservation work in a number of ways. Dogs can be trained to sniff out locations of endangered animals, identify invasive species and track down illegal poachers and contraband, to name just a few examples.

It’s a job dogs approach with enthusiasm; they’re trained to detect specific scent “targets” and are rewarded when they identify them in the field.  Wicket, a Labrador mix who recently retired from Working Dogs for Conservation, could identify 32 different scent targets, including Chinese moon bear scat. During her 12 years of work, she traveled to 18 states and 7 countries — even riding on the back of an elephant — to help protect wildlife. Not bad for a shelter dropout.

In addition to a phenomenal sense of smell, conservation dogs must be athletic and agile enough to cover long distances and various terrains. Dogs need to have the drive to work in a pack and/or with a handler, a desire to search and hunt and the motivation to work for a reward. These characteristics, of course, fit the description of many retrievers, Australian cattle dogs and border collies. After training, the dogs are paired with handlers to help protect wildlife and the wilderness in a number of ways.

With only 300 to 350 North Atlantic right whales in existence, they are among the most endangered type of large whales. To help keep tabs on population size and distribution, conservation dogs ride in boats, in search of whale scat in the water. Dogs are first trained to recognize whale scat on land. The trainers progress to placing scat in plastic containers that float on the water. The training works; there was a Rottweiler named Fargo who could identify whale scat as far away as a nautical mile.

In the wild, scat detection is not only used to map locations of animals; the scat itself can be examined to learn more about the animal such as nutritional status and toxin exposure. DNA tests on scat provide other information, including the species and sex of the animals.

Some conservation dogs ferret out invasive insects, plants and even aquatic species. On Santa Cruz Island off the coast of southern California, invasive Argentine ants displaced native bees, spiders and other ants, threatening to disrupt the local ecological balance. Since the ant eradication program has begun, a Labrador retriever named Tobias patrols the island and sits abruptly to notify his handler when he’s identified a whiff of the ants. His reward? A game of fetch with a soft, blue ball.

Protecting Against Wildlife Poaching and Trafficking

Ruger, the Lab mix rescued in Montana, is now one of five anti-poaching dogs working in Zambia. He and his other canine counterparts patrol the area searching for target scents such as rhino horn, ivory, skins, bushmeat, guns, gunpowder and ammunition.

While working a roadblock, Ruger sniffed out a primer cap from illegal muzzle loaders used in poaching. It was hidden inside a matchbox, wrapped in a plastic bag, inside one of many suitcases packed in a car. In this way, Ruger has helped nab 150 poachers and put an end to their illegal trade.

One day, when Ruger is ready to hang up his work vest, like other conservation dogs, he’ll be provided a permanent home with a cushy bed in gratitude for a lifetime of meaningful work.